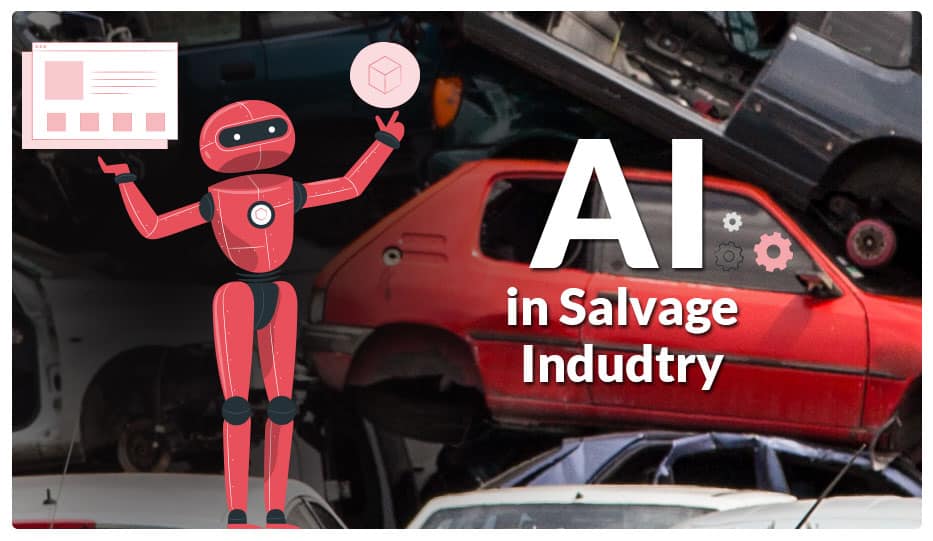 Before a vehicle attains a salvage title, it goes through multiple stages. Until recently, these stages were manual or semi-automated. But the salvage industry has evolved, and has started weaving the benefits of AI into the fabric of their operations. But you won’t be able to grasp the true power of this newfound automation until you understand how lengthy and cumbersome each little step in the process can be. In this blog, we will look at each step in the salvaging process and also understand how the injection of AI has greatly helped the industry pass a salvage claim faster.

Reasons a vehicle goes up for salvaging

The go-to response for a vehicle which has been in an accident is not to send it for salvaging, but to revive it. Analysts strike a balance between the cost for repair and total loss, and make a decision. If it’s infeasible to repair the car to the point the original owner can use it again, then the car is sent for salvaging.

6 Reasons A Vehicle Has to Be Salvaged

These are high-intensity accidents in which a vehicle gets totaled. Declaring a vehicle as totaled becomes final when your insurer tells you it’s not worth repairing the car. To arrive at this conclusion, an insurance agent or investigator checks repair costs against actual cash value. Actual cash value is the money you would have gotten for your car in the state it was before the accident (this does not take into account the cost price of the vehicle). If the actual cash value is far lesser than the money you would need to revive it, the insurer suggests that you should send it for salvaging.

These are of different kinds, and vary from one geographical location to next. An earthquake gives more obvious indications of car damage than a flooding. With flooding, the damage can be more impervious. The water may have seeped into the internals of the vehicle, while the external conditions seem unaffected. In areas prone to floods or hurricanes, your insurance policy just might cover flood damage. Even so, it would be more prudent to salvage the vehicle.

These are the IKEA version of automobiles. Mechanic enthusiasts purchase the vehicle as a set of car parts and assemble it themselves. When such a car starts giving problems, repairs are often haphazard and from local / unauthorized dealerships. This is because the car is an assembled puzzle of multiple components, many of which may be belonging to disparate suppliers and brands. Insurers say they are more ready to send kit cars to salvage yards than to undertake the repairs.

This is related to the previous point. If you have added extra parts (say a fender) from anyone but the authorized dealer of the vehicle, it becomes questionable whether a repair on the car will ever go smoothly. The car may come out repairs looking good as new, and might not even give problems for quite some time. But since you introduced foreign objects to the car, there is a high probability of problems down the line.

Your insurance policy determines how you will be compensated in case of vehicle theft. Sometimes, investigations are successful, and you get your car back. But both you and your insurer are facing a legal void; you don’t know where your car’s been. In such cases, the insurer is more inclined towards salvaging the car and making retribution as per the underwriting policy.

Making old (really old) vehicles function again is a task for skilled hands. Even so, an antique may not be safe enough to drive for everyday use. You are better off salvaging the vehicle. Or, if you’re a collector, display it proudly on your front yard.

Labels Associated with Each Salvaging Project

When you finally decide that you do want to salvage your vehicle, the salvagers assign a label to your case. These labels vary from yard to yard, based on how they want to organize their projects. Following are the commonly used labels:

A clear title is issued to a vehicle which has not encountered the salvaging process before.

This title is assigned to vehicles which have been totalled in an accident. Many organizations have sub categories to this title:

Totalled Cars that can be repaired and sold as second-hand cars. The nature in which the vehicle achieved total loss status also comes into play here. Was it an accident or a natural calamity? Is there internal damage to the vehicle or just outer damage? These are decisions a salvager will take.

There is no hope for repair. The vehicle best serves its purpose when stripped down for parts.

This is opposite to a clear title; vehicle which have been through the salvage process before get this title. Second hand cars especially have to be scrutinized for this purpose.

There are a lot of legal snafus when it comes to restoring vehicles which have been found after theft. The salvager will decide, in consultation with the car owner, whether they want to risk sending the car back on the streets or strip it for parts.

The vehicle was not completely hopeless, and the owner decided to revive it and continue using it. This is pretty much case-closed and after the underwritten decisions are executed, the vehicle goes back into a state of daily use.

An insurer will not make an independent decision on what is to be done with an accident car. The customer guides the salvaging process. It is her / his discretionary decision but there are technical aspects that also matter. Each of the above labels come with their own implications and some of them are irreversible. For e.g., an Owner-retained title cannot revert back to the other titles since the owner has decided she / he wants to keep on using the vehicle. Any further damage because of the owner’s incorrect assessment may not make the insurer liable. Also, any decision will also take away from the coverage, so it is the customer’s responsibility to make the right decision.

As you can see, there are a lot of pressures in the salvage process. They can be frustrating especially considering the person has just come out of an accident. You will have to rely on the sound judgment and timely actions of those who are consulting with you. To remove any points of contentions or to reduce turnaround times, the auto salvage industry has started relying heavily on AI and machine intelligence to make several of the decisions easier.

It’s interesting to know that there are a lot of different titles to consider when it comes to salvaging a car. My father is looking for an auto salvage yard because he would like to get rid of his old car soon. He would like to make sure that its usable parts will still be able to go somewhere in order to not be wasteful.

Hi Alice! Thanks for reaching out. Request you to please visit our contact page and drop us a query. We will see how best to assist you, because we don’t directly deal in salvaging vehicles, but rather provide AI-based solutions to make the salvaging process a little easier. Nonetheless, with further details, we might be able to help you out!
https://claimgenius.com/contact-us/