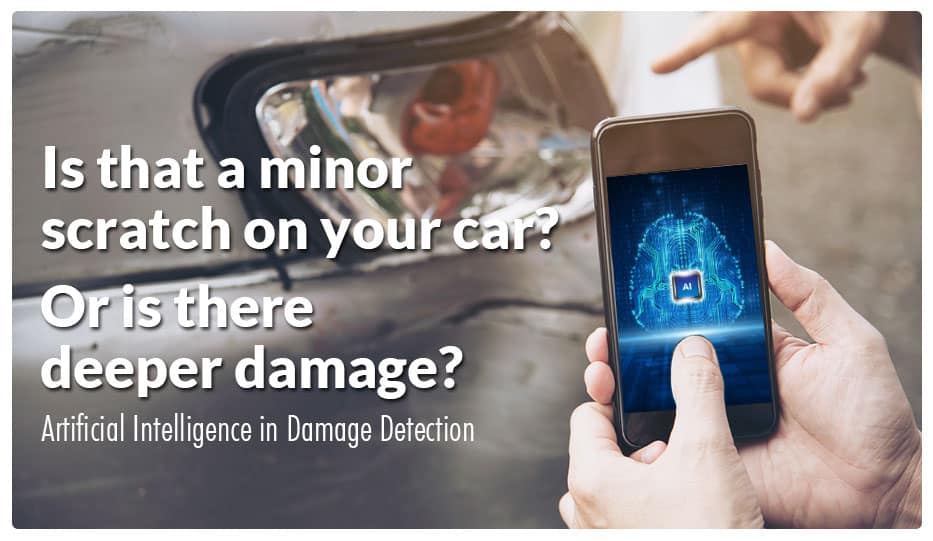 Is that a minor scratch on your car? Or is there deeper damage? AI can tell.

Damage Detection is one of the key processes in both insurance and salvaging. What is the cost estimate? Is the vehicle in a state to function again, or did the accident damage it beyond repair? In that case, would it be more prudent to send it to the salvage yard? These are questions which manual inspection would answer. The results of the investigation would prove to be crucial for carrier underwriting decisions.

However, with this whole manual inspection process becoming tedious and sometimes a cause for contention — “How can I believe this is the true cost estimate?” — there was heavy impetus on automation. AI came to the rescue.

Not only does AI make damage detection faster, but it also makes the process faster. The irate person we saw in the previous paragraph has every right to question the underwriter’s decision. How can a person guarantee error-free analysis? There is much less doubt when there’s a machine at the other end, doing all the work. The question arises, how does an AI system even begin to perform a task as complex as damage detection?

In an earlier blog, we have already seen the role of AI in Image Recognition. Computer Vision is just a more drilled down version of the same concept. For an AI to understand damage, it must first understand what a ‘healthy’ car part looks like. It does so by compartmentalizing the images of cars (fed to it as training data) into individual components. Later, when it analyses the image of a damaged car, it performs a comparative study of both states of vehicles and determines where exactly the damage is.

If taught properly with biases, the IR system can translate the dents and scratches in the images to damage intensity levels, thus giving a complete analysis of overall damage.

Computer vision begins by creating a 360-degree view of the accident site photographs of the car in question. Then it marks severity of damaged parts by scanning the breakdown of the singular 360-degree view. It scans through and through and the more advanced systems can even predict internal damage by guesstimating the characteristics of external damage (to determine the vehicle health for salvaging). AI companies looking to dip their feet into the insurance and salvaging world have to have a solid data accuracy and throughput plan in place. Not just for quality performance, but also to satisfactorily answer anyone who raises a finger towards the error-rate of your AI’s analysis. Sometimes, expert systems, trained under supervised learning, will make ‘buckets’ or categories of intensity and sort on damage severity. This too the AI claims organization should regulate as per client satisfaction.

The Driving Spark for Computer Vision

Today, data is becoming more and more about images. Images convey more data in a glance than simple text ever could. Social Media is full of images, a lot of the infomercials we see online are brimming with images. Flowcharts and numeric graphs are easy tools to simplify and explain complex subject matter.

Computer Vision, AI’s substitute for the human eye, was but a natural line of thinking. We as humans ‘see’ and extract data from visuals and images, why shouldn’t artificial intelligence? We at Claim Genius make ample use of CV by allowing end-customers to simply snap a click of the damaged vehicle and upload it via our mobile app or the carrier’s own app. The app sends over the data to our IR systems which give a complete damage analysis without any hassles.

Before we discuss further on Claim Genius’s damage detection mechanisms, let us take a look at the underlying concept of computer vision.

The goal of computer vision is to make sense of the content of digital images. The major hurdle for CV developers is to reproduce the power of human vision. This process may involve extracting a description from the image, which may be an object, a text description, a three-dimensional model, etc.

To channel this process to give maximal throughput, tech researchers have been trying hard to understand the biological mechanism of human vision. It has proved to be a tougher feat to achieve than it seems. Our minds can’t seem to grasp the fact that there is so much complexity in something that we have been doing since practically opening our eyes for the first time as babies.

A typical CV system today might make use of the following stages (not in this particular order):

After repeating as needed, computer visions finally send over the organized data to whatever requirement it has been built for. In this case, a damage detection report.

Claim Genius is one of the leading AI claims organizations. We specialize in touchless claims and also speedy salvaging decisions. Our GeniusSALVAGE tool allows yards to instantly inspect and assess vehicle damage and also automate salvage bids. Salvage yards can achieve this by uploading photos from the Claim Genius app or the carrier’s mobile app. We are also ahead of the game in the auto insurance industry.

With GeniusCLAIM, insureds can upload accident photos of their damaged vehicle through our Genius APP or the carrier’s own app. Claim Genius’s Al technology instantly and accurately determines damage severity, affected parts, repair or replace decisions, and total loss. Using our tool, carriers get a holistic, point-of-accident view of vehicle status. They can make instant decisions on how best to route a vehicle for processing.

Our philosophy is to let AI handle the convoluted tasks, letting you get back to your end-customers in no time. With intelligent choices, comes greater client satisfaction!

Next article How AI Has Transformed The Way Insurance Works